In Anishinaabe language the area was known as, Gaa-waategamaag, "land of reflections". Changed by tourism promoters to Kawartha, meaning "bright waters and happy lands".
Curve Lake First Nation people are of the Mississaugas of the great Anishnaabeg (uhnish-nahbe) Nation. MAP
Hiawatha First Nation is an Ojibway First Nations reserve. MAP

Printable resources only at our TTSW.ca: TTSW MAP - KM from any lock to any Lock - Details for all Locks - How Lock #21 works.

There is no news in the truth and no truth in the news!
Growing older is mandatory, growing up is optional!

We have started Ontario Times as an online newspaper. The version we are using, connects to current stories and articles, but is simply intended to collect where the data comes from so we can embed that into the finished online newspaper version in the future.

One has to wonder why the City wouldn't use one truck for all garbage pickup.
Use one truck plus a trailer and a crew of two. Have a "pup" trailer pulled by the garbage truck for blue box waste. The trailer can be dropped at the recycling facility on the way to the dump on Bensfort Road. Once emptied the truck returns to the recycling facility and picks up another, empty, trailer and continues their route.
You see these truck/trailer combinations all the time on the highway, usually for gravel and such, a main truck with a trailer of almost the same size.
Environmentally friendlier as only one gas burning demon is running the streets, less preventative maintenance required and a safer work environment with two employees on the truck. One employee drives and picks up the garbage and the second the blue box material.
You only need to view the snowplowing on some streets to realize that Council needs much more input and the managers much less into how these departments operate.
I realize hindsight is 20/20 but a bit of foresight reduces the amount of hindsight available.

"While hockey icon Don Cherry was fired after leftist backlash this week, the former Coach's Corner co-host has been a thorn in the side of the Canadian left for years. .." Read more The same type of "Kooks and Pinkoes" branded Peterborough Tent City or Opioids Capital of Canada. One has to wonder about Trudeau's black face or Mr. Dress Up and family, in India.

The following are the thoughts of the author and represent his opinion.

The current opinion of the Star, Ottawa Bureau and reprinted in the Peterborough Examiner, 11-05-2019. "'Block' and 'Mute' both better election tools than Twitters planned political ad ban"
Of course they don't want the AD BAN because then their ads, all parties, are also blocked and that is not their way, they want to mute everyone else only. This story is published because of the vested interest of news organizations, they would lose ad revenue if their buddies could only advertise once every four years. So, I suspect, you'll see more positive Liberal stories and negative ones for all the other parties.
If you believe this kind of opinion it really is time you get out on the Internet more and read real news and other opinions.
I can only say well done Trudeau the $600,000,000 continues hitting it's mark. As we know, now they'll compete to get that extra bit of dole every year.
Opinion is drivel when not substantiated by proven facts along with named and validated sources. We don't need the Advertising Council of Canada, thought police; we need more freedoms and much less bureaucracy to control what we are capable of seeing or digesting. What makes them capable? If they were capable they would ban all political ads, not directlly related to an election, on all media in Canada! If they were competent they would demand the $600,000,000 returned to the federal coffers that they should have blocked to start with.
You see they want to control your every thought and deed. They don't want you to be individuals they want you to be clones of their thoughts and lifestyles.
This is Orwell's 'Nineteen Eighty-Four' and 'Animal Farm' come to life! As well this is the fake news in action, perfected in the United States and imported to Canada.
Read those two books and you'll cancel or enhance your news sources. Orwell was enlightened at the end of World War II and saw what current despots want.
Frankly this is totalitarianism as bad as it gets. Eric Arthur Blair, pen name Orwell, saw our future! Have you?
I strongly urge you to read beyond the local, try reading a bit of the National Post, you must keep an open mind and put all that brain washing aside and make your opinion based on fact, not just being another of their clones in thoughts and actions.
Here's a good starting point: https://en.wikipedia.org/wiki/George_Orwell#Final_months_and_death
JS

"The original story is here .." Read more. OUR OPINION: Where we come from that is called freedom of choice! Just like in real life, whether you buy a newspaper or not is your decision, not the Governments. Doug Ford is correct in making it a choice, these student newspapers now will serve the students, not the institution. If they have value to the students they will survive and if they don't they were a waste of time and money before.

"roadclyst Community Primary School in Devon has built a special room to accommodate its pupils - with an average class size of 42. .." Read more

We registered KAWARTHA on March 8, 1997 with the .com, commercial use extension. That's well over 22 years ago - time flies but honesty and integrity are constants.

D.B. Sutherland, Sir Sandford Fleming College's first President, challenged us, in 1968, with the following suggestion, in the College's first yearbook:
"All of us who are members of Sir Sandford Fleming - governors, students and faculty - have a responsibility here. If we constantly choose the timid, the safe and the known, we will no doubt win the approval of the good, grey majority who never look much beyond the day's sunset.
But the deed will show, and posterity will know. Let us hope their verdict will not be that we drove off into the future with our eyes resolutely fixed on the rear view mirror."

After working five years at CGE we decided to attend the new College, Sir Sandford Fleming, SSFC, as a mature student with a grade ll eduation and 5 years of factory work. We graduated with two diplomas from full time courses, the first to do so, and started a lengthy 20-year career in our chosen field.
Upon completion we decided to work with computers in a retail environment and ended up being the first internet provider in the Peterborough and Lindsay Region and were also the first to offer the full WWW suite; DNS, design and hosting.
To follow the explored road is always easy, to venture into the unknown is the challenge he requested of us, having others follow makes the journey worthwhile.
We Let The Deed Show!

The wayback machine did not start tracking till 1996 - here we are!
Click here to view the businesses that we led to the web.

Match Up
Match Up provided by FreeThesaurus.com

Some Domain Names For Sale: 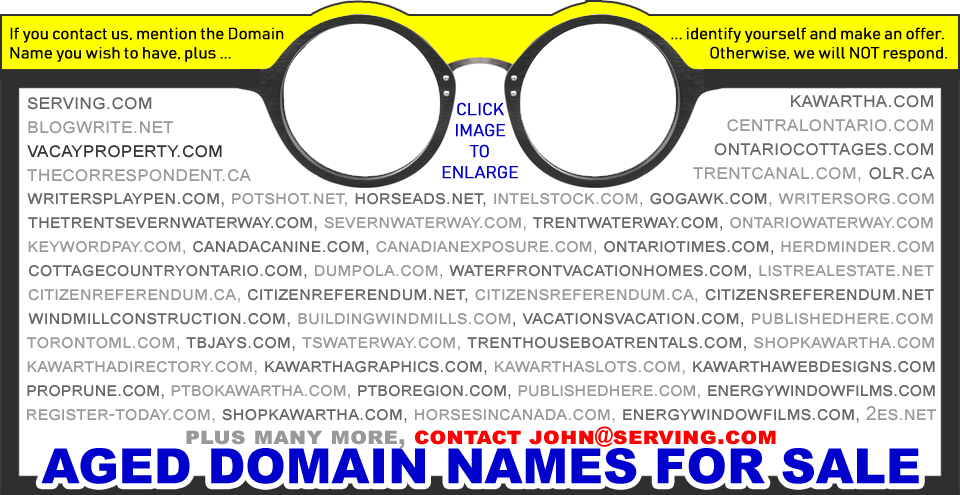